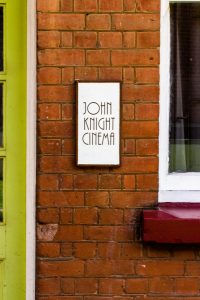 The National Art Gallery of Zimbabwe honours architect John Anthony Knight through the establishment of its first cinema room.

Cinema is a 20th Century art. It develops in the midst of the most experimental sensibility. It flourishes in the fluctuating mode of modern technologies. I love it for its diversity. Film art is challenging by this very coincidence. Its ability to express a range of our human emotion, to explore, to record, to challenge out intellect, to make us laugh, to satirise. Cinema has experienced the most rapid and novel growth of any art form, it has also commanded the greatest interest.

The properties of this medium coincide with those of photography, yet film moves beyond the stilled image through its further technical properties, today this includes sound. Editing is an integral property as it establishes a meaningful set of correspondences between images, continuity between shots. We move frame by frame toward a new understanding.

Since March 1994 he was the sole partner of STUDIO 10, JOHN KNIGHT, CHARTERED ARCHITECT, his own practice commencing with small commissions for mainly domestic buildings. Projects have steadily grown in scale and complexity to include larger residential, public, institutional, religious, recreational and commercial architecture.

Under Gordon Norman Chartered Architect Chartered Architect in October 1991 to February 1994, projects included the National Gallery renovations and additions to listed building, and received an award of Merit from the Institute of Architects of Zimbabwe Awards Presentation 1991. The restaurant at Nesbitt Castle, Bulawayo, and Entumbane Shopping Centre, MIPF.

Knight has lectured in History and Theory of Architecture to Architectural Technology students at polytechnic and has also tutored at the National University of Science and Technology. The National Gallery of Zimbabwe is very proud of its long standing association with John Anthony Knight and regard his presence and contribution to the institute as integral as its own growth.